On this page you will find some valuable information about the public transport from the airports of Berlin to the city center.

There is no direct metro line linking the airport Tegel and the city center. However, there is a frequent connection with public buses.

The bus line TXL takes 38 minutes from Tegel to Berlin Alexanderplatz. It allows quite a bit of sightseeing on its way. The bus goes via the new main Railway station, Brandenburg Gate, the famous symbol of the division of Germany and along the renowned street „Unter den Linden“ with the New Guard House on its left and the Old Museum, one of the most significant buildings of classicism. Next to it you will see Berlin´s Cathedrale and right opposite the gigantic building site of Berlin City Palace. 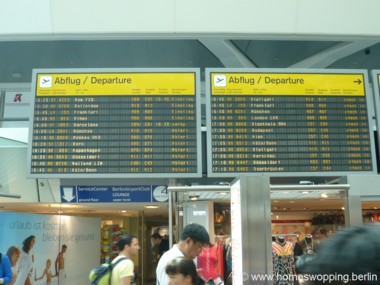 The bus line X9 is an express bus and brings you from the airport to Bahnhof Zoo in only 20 minutes. Line 109 takes a similar route and arrives at Bahnhof Zoo after 28 minutes. With both lines you will follow the most beautiful parts of the elegant boulevard Kurfuerstendamm.

Depending on your destination in Berlin you can either take the metro line 9, bringing you in 24 minutes from the airport to the station Ostkreuz, or the line 45, which takes 33 minutes to the station Südkreuz. Both stations offer ample connections in all directions.

You can also take the regional express (RE) or the regional train (RB), which bring you in less than 30 minutes to the station Friedrichstrasse. There you are right in the middle of things and have connections to all destinations.

You will find timetables and the current ticket fares at www.bvg.de (English service available)